“Any time.  Any where.  Any style.”  Any smack talk.   The newest project by Muay Thai and MMA fighter Vuyisile “The Cheetah” Colossa held its presser to announce the card for their inaugural March 8th event.  Featuring ten fights running the gamut from boxing and Muay Thai to full-on Mixed Martial Arts, this will be the first time a White Collar Amateur event has ever been held in Hong Kong – or in Asia for that matter.  A special treat for fighters and fans alike: they will be fighting in a cage. 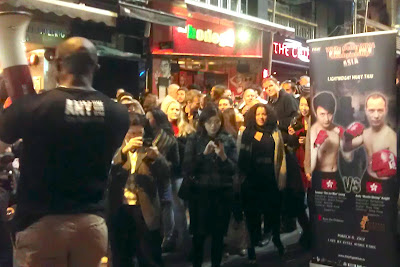 The event kicked off at 9pm outside of Zinc in Lan Kwai Fong, amidst life-size stand ups of each pair of fighters, which was the first time all of the participants got to find out who and what style they would be fighting.  Around one hour later, fighters were introduced and the stare downs began. 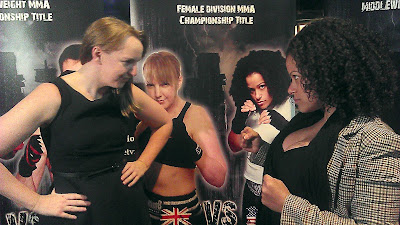 The Female MMA match is between Katie “‘Ave a Go” Lowe versus Eva “The Scorpion Queen” Rona.  Ave A Go said she was surprised she was picked for the MMA championship bout, and surprised about her opponent, with whom she’s gotten to be good friends.

“I’ll have to pretend I hate her for the next three weeks,” she stated.  “She’s got amazingly fast kicks, I’ll have to learn the hell how to block kicks and catch them.”  When asked how she thought the fight will go, the bubbly blonde laughed and said, “I’d like to say I’ll take it to the ground but I don’t know exactly what that means!” 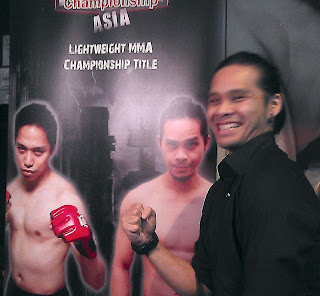 Her opponent, The Scorpion Queen, was equally exuberant about their friendship, which evolved through training in the City Fight Club program.  “We have a good relationship, we’re having fun, so no smack talk,” she chided.  “I feel as long as I stand up, I’ll be okay.  On the floor, I’m in trouble.  I plan to keep it standing.”

For the Lightweight MMA title, Redd “The Ripper” Baluyos will take on Wallace “Little Crab” Lau, so named because he practices a type of kung fu actually called Crab Style.  The Ripper thinks that Little Crab has good take downs and grappling, so he will focus on more groundwork leading up to the fight, but ultimately plans to keep it standing.  And possibly because Little Crab wasn’t around, The Ripper got a little vocal.  “I’m a nice guy, you know,” he started, “But I’m going to break that crab in two.  I love eating some spicy crab!” 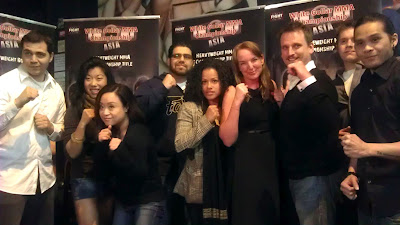 The first Middleweight bout features James “The Mamba” Li versus Jeff “Soulchild” Siegel.  Dr. Li was performing his day job – cutting someone WITH their consent – and Soulchild chose the opportunity to sound off.  “I’m going to crush his head, he’s going to have to do surgery on himself!”  After the hoots died down, Soulchild said he thought they were “complimentary fighters”, Mamba being more of a ground guy while he likes to stand up.  “I like charging in, I’m young, foolish and aggressive.  We’ll see how it works out.” 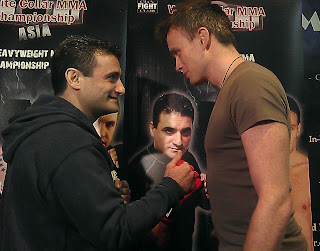 The match for the Middlewight Championship goes to Charbel “The Phoenician” Assaf and Morgan “The Viking” Cousin.  The Phoenician, more known for his tireless work at his late night must-visit restaurant than his hard-earned blue belt in Brazilian Jiu Jitsu, joked he just hopes he can show up.  “I didn’t kick box, so he’s better than me,” The Phoenician admitted, “But I’m ready for both.  We’re going to go to the ground.  Any opportunity I get, I will take it.”

The Viking acknowledged the same regarding their styles.  “It’s an interesting match up, two different styles.  I’m training hard at grappling and resisting take downs.”  When asked if he had anything to say to the Phoenician, someone from the crowd yelled “Make a kebab out of him!”  The Viking said, “Oh that’s a good one, use that!” 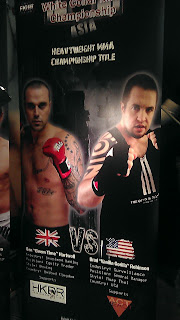 City Fight Club participants have all gone through three months’s training in boxing, Brazilian Jiu Jitsu, and Muay Thai, and have competed against each other in these respective martial arts.  The final month of training for the White Collar Warriors who have been selected to perform in the MMA finals will be dedicated to honing all of their skills together.  The contestants will protective gear specified in amateur competition such as shin guards, head gear, and larger gloves.

Founder Vuyisile Colossa seemed like a proud father when he introduced the fighters.  This event culminates his efforts to broaden the knowledge of the sport of MMA while fundraising for the local and international charities each participant represents.  He feels that his efforts in producing a White Collar amateur event will grow the sport from a grass roots level through more potential amateur events and an educated audience. 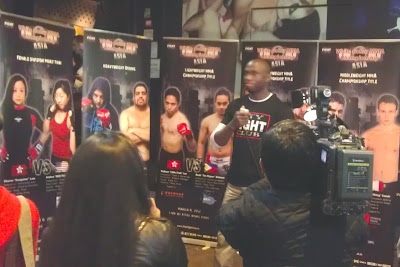 When asked about how he felt on the success of City Fight Club and the excitement surrounding the launch of the first Championship, The Cheetah grew quiet.  “At this moment, ” he began, “I feel good; I feel humbled by the support and happy about the fighters’ progress.  This is just the beginning!”

For more information about City Fight Club and to purchase tickets for the March 8th event, visit the City Fight Club website.  For social media updates and announcements, join their Facebook page. 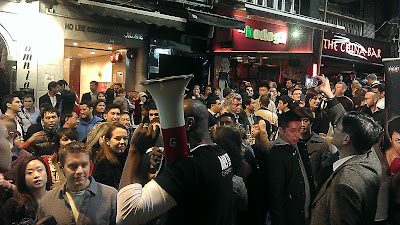 Pancrase adds 10 events to its 2020 schedule

Laban MMA 2: John Cris Corton vs Dennis Salazar is the...

Up to the minute news, insightful features and comprehensive resources for the sport of mixed martial arts in Asia.
FOLLOW US
© 2019 Tap Media Ltd. All rights reserved.
MORE STORIES